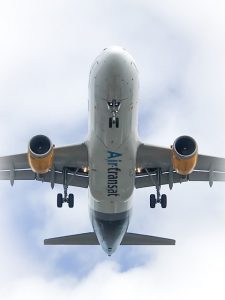 Along with the wings, tail, landing gear and cockpit, the fuselage is one of the main components of a typical airplane. Based on its name, many people assume it’s responsible for holding or storing fuel. The term “fuselage,” however, comes from the French word “fusele,” meaning “spindle-shaped.” Fuselages feature a long and vertical spindle-like shape from which they receive their namesake So, what is the fuselage exactly?

Overview of the Fuselage

The fuselage is the large outer shell that encompasses an airplane’s main body. It features a hollow interior in which seats, as well as other equipment, is housed. Fuselages simply serve as the outer shell of an airplane’s main body. On the sides of the fuselage are the wings, whereas the front contains the cockpit and the rear contains the tail. Combined with the landing gear, these are the basic components of a typical airplane.

Because it’s the outer shell of an airplane’s body, the fuselage is exposed to significant stress. Therefore, it must be designed with strong, durable materials. If the fuselage is breached, the airplane’s cabin may lose air pressure. When this occurs, it can create a dangerous environment for crew and passengers alike. As the airplane’s cabin loses pressure, oxygen levels will drop. Furthermore, the loss of cabin pressure can cause airplanes to lose control. Crashes related to loss of cabin pressure are rare, but they have occurred.

There are several different types of fuselages used in airplanes, each of which features a different construction. Truss fuselages, for example, are characterized by the use of welded metal tubes. They are lightweight, inexpensive and offer a high level of strength and durability. Geodesic fuselages, on the other hand, are characterized by the use of strip stringers to achieve a basket-like construction.  Geodesic fuselages are designed to withstand localized structural damage without jeopardizing the rest of the fuselage’s integrity. In addition to truss and geodesic, other common types of airplane fuselages include monocoque shell and semi-monocoque shell.

Although there are exceptions, most airplanes feature an aluminum fuselage. Aluminum is strong, lightweight and naturally resistant to rust. These qualities make it a versatile and effective choice of material for airplane components, including fuselages. With that said, composite fuselages have become an increasingly common alternative to aluminum fuselages. Composite fuselages are often stronger and even better protected against rust and corrosion than their aluminum counterparts.