Should You Turn Your Smartphone to Airplane Mode When Flying? 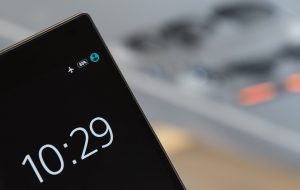 Whether it’s powered by Apple’s iOS or Google’s Android operating system, nearly all modern smartphones have airplane mode. Also known as flight mode, it’s a staple feature that, when enabled, disables all radio incoming and outgoing radio signals. The general idea behind airplane mode is that it prevents interference with the airplane’s navigation and communications systems. Considering the recent advancements made in the field of aerospace technology, though, you might be wondering if airplane mode is really necessary when flying.

All airplanes use radio signals for navigation and communications. As a result, they can “pick up” radio signals from other devices, including smartphones. A pilot, for example, may hear static if a passenger is using his or her smartphone. It’s not a serious hazard, nor does it damage the airplane itself. Smartphones and other radio-transmitting devices can, however, create interference that’s a nuisance to pilots and crew members. Airplane mode is designed to eliminate the possibility of interference by disabling the smartphone’s ability to send and receive radio signals.

Airplane mode originated in response from commercial airlines banning the use of radio-transmitting devices during flight. In an effort to reduce interference, many commercial airlines have passed their own guidelines prohibiting passengers from using devices that transmit radio signals. This prompted mobile device manufacturers to include airplane mode in their smartphones. Today, you can find airplane mode available in the settings of most smartphones and tablet computers. In just a few clicks or taps, you can either enable or disable this feature. When enabled, of course, the smartphone won’t be able to send or receive radio signals.

What the FAA Says About Airplane Mode

In 2013, the U.S. Federal Aviation Administration (FAA) issued a statement about airplane mode. In the statement, the FAA recommended passengers disable all cellular technology during flight. It also said that short-range transmission signals, such as Bluetooth, are accepted. And if offered by the airline, passengers can use Wi-Fi.

If you enable airplane mode on your smartphone, you won’t be able to use Bluetooth or Wi-Fi. Therefore, the FAA doesn’t require passengers to use airplane mode. Neither Bluetooth, or Wi-Fi — assuming Wi-Fi is offered on the airplane — will interfere with an airplane’s navigation or communications systems.