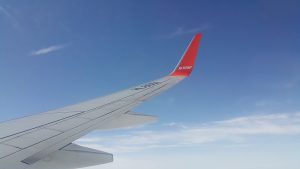 The Airbus A380 is undoubtedly a massive plane. Featuring a double-deck body and four engines, it’s currently the world’s largest passenger airliner. However, there’s a new plane that’s even bigger.

Developed by Microsoft Billionaire Paul Allen’s company Stratolaunch, the new plane was recently rolled out of its hanger in California for testing. This gave the public a sneak peak at the super-sized plane, which the company says will be used to launch rockets into orbit.

In the past, companies like SpaceX have used land-based rockets to launch payloads into Earth’s orbit. This isn’t necessarily bad, though it’s not the most efficient method, either. The new Stratolaunch carrier plane takes a different approach by flying into the air, and then launching the payload-equipped rocket. According to a press release, the Stratolaunch plane is capable of launching rockets into orbit why flying at 30,000 feet.

Initially, the company says the Stratolaunch plane will carry just one Pegasus XL rocket — a common rocket manufactured by Orbital ATK. Later, however, the company believes the plane will be able to support up to three Pegasus XL rockets. So, instead of launching just a single rocket into orbit during flight, the Stratolaunch plane can launch thee rockets into orbit.

Of course, Stratolaunch Systems have been working on the massive plane for several years now. Jean Floyd, the company’s Chief Executive Officer, said his team recently removed the fabrication infrastructure and placed the aircraft’s entire weight on 28 wheels for the first time.

“Over the past few weeks, we have removed the fabrication infrastructure, including the three-story scaffolding surrounding the aircraft, and rested the aircraft’s full weight on its 28 wheels for the first time,” Floyd said. “This was a crucial step in preparing the aircraft for ground testing, engine runs, taxi tests and, ultimately, first flight.“

So, just how big is the Stratolaunch carrier plane? After being rolled out of the Mojave Air and Space Port hanger, drones captured the massive plane, with a wingspan measuring approximately 385 feet. It’s so large, in fact, that many airports restrict it (airports typically restrict plants to a wingspan of 260 feet).

On another note, the Stratolaunch is made of all composite materials. When fully fueled, it tips the scales at roughly 1,200,000 pounds, which is pretty heavy to say the least.