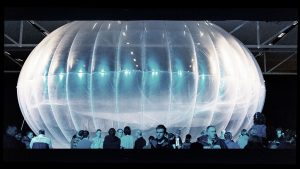 Causing an estimated $95 billion in damages in Puerto Rico, Hurricane Maria has wreaked havoc on the U.S. island. Its strong winds uprooted trees, toppled buildings and brought several feet of flood waters. It’s been several weeks since Maria hit, but much of Puerto Rico remains disconnected from the outside world — a problem that Google’s Project Loon is hoping to resolve.

According to the Federal Communications Commission (FCC), communications outages still affects 78% of all Puerto Rico counties. This is troublesome given that many residents need reliable mobile phone service for medical purposes. However, Google is looking to restore Puerto Rico’s communications services by flying a network of large balloons into the stratosphere.

Known as “Project Loon,” the balloons will fly approximately 20 km high where they’ll work as portable, airborne cell towers. Residents and other individuals on the ground can then connect to these towers to make calls using their mobile handsets. Puerto Rico officials say it could months before the island’s communications are fully restored. In the meantime, Project Loon could prove invaluable in bringing mobile service to the millions of American citizens who are still affected.

Google Loon has already been granted a license to fly the balloons over Puerto Rico. In a statement to the press, the FCC’s Ajit Pai explained that Project Loon is an “innovative approach” to restore the island’s connectivity.

“More than two weeks after Hurricane Maria struck, millions of Puerto Ricans are still without access to much-needed communications services,” FCC chairman Ajit Pai said in a statement. “That’s why we need to take innovative approaches to help restore connectivity on the island. Project Loon is one such approach.”

The project stems from Google X, a secretive branch of Google’s research and development. Project Loon proved instrumental earlier this year in delivering coverage in Peru amidst severe flooding.

So, how does Project Loon work exactly? The balloons look and function like big weather balloons. They are made of high-end plastic materials and filled with helium, allowing them to lift transponders high into the air. The balloons are heavily pressurized so they can stay in the air for up to 100 days. Each balloon carries the equipment needed to project mobile coverage over the surrounding area.

There’s still one roadblock preventing Google’s Project Loon from delivering wireless reception to Puerto Rico: it needs a carrier partner. Given the significance of this task, however, it’s safe to assume that shouldn’t be a problem.