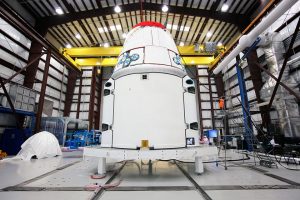 Boeing has successfully completed a parachute test for its Starliner crew capsule. On May 10, 2019, the aerospace manufacturing company shared a video on its Twitter account. In the video, a Starliner capsule is shown falling to Earth under the support of three deployed parachutes. While only 35 seconds long, the video demonstrates Boeing’s abilities in designing and building a safe crew capsule that could one day be used to transport astronauts to and from the International Space Station (ISS)

What Is the Starliner?

The Starliner is a crew capsule that’s being developed by Boeing under NASA’s Commercial Crew Development program. Like other crew capsules, it’s intended to transport astronauts to and from the ISS.

Boeing has been working on the Starliner for nearly a decade now. In 2010, NASA awarded the aerospace manufacturing company with $18 million in initial funding. In 2011, Boeing was awarded an additional $93 million to further refine and improve the crew capsule. And on 2012, Boeing received an additional $460 million in funding from NASA.

Boeing has also designed the Starliner so that it works with a variety of launch rockets, including the Delta IV, Falcon 9 and Vulcan.

While the Starliner is still in development, Boeing has already completed a successful parachute test. You can check out the video on Boeing’s Twitter account here. The time-lapsed video shows a Starliner capsule gracefully gliding back to Earth as three parachutes are deployed. According to Boeing, the parachute test was necessary to quality the Starliner’s landing system.

“It’s part of our path to qualify the entire landing system to fly,” wrote Boeing in a tweet showcasing the recent parachute test.

While Boeing hasn’t revealed an official date for a crewed Starliner launch, the aerospace manufacturing company says it won’t occur before November 2019. With that said, Boeing may conduct an automated unmanned launch as early as April 2019, during which it will likely launch a Starliner capsule to ISS and then back to Earth to ensure the landing system, as well as all other systems, function as intended. Assuming all goes well, Boeing may then conduct a manned launch towards the end of 2019 or beginning of 2020.