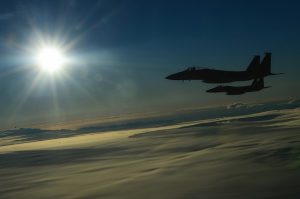 The F-15EX is a variant of the F-15 Strike Eagle. Its origins can be traced back to 2018. During this year, the U.S. Air Force and Boeing began talks for a replacement to the F-15C/Ds. The U.S. Air Force specifically wanted a new variant with infrared (IR) radar capabilities, advanced avionics and a service life of 20,000 hours. After agreeing to a deal, Boeing officially launched the F-15EX project. The F-15EX jet has all of these features.

“With its large weapons capacity, digital backbone, and open architecture, the F-15EX will be a key element of our tactical fighter fleet and complement fifth-generation assets,” said U.S. Air Force Colonel Sean Dorey.

About Boeing’s Latest Delivery of the F-15EX

Boeing’s latest delivery of a single F-15EX jet marks the first of many to come. Reports show that the U.S. Department of Defense (DOD) ordered eight of the new jets at an estimated cost of $1.2 billion. The U.S. Air Force says it will use the new F-15EX jets for both training and operational purposes.

Boeing still produces commercial jets, but it has contracts with military organizations like the U.S. Air Force as well. One of its contracts involves the production of the F-15EX jet. As previously mentioned, the F-15EX jet is a variant of the F-15 Strike Eagle. There are nearly a dozen F-15 Strike Eagle variants, some of which include the F-15E, the F-151, the F-15K, the F-15S, the F-15SG, the F-15 Advanced Eagle and the F-15QA. The F-15EX is one of the latest variants that’s being manufactured by Boeing.