Blind Rivets: How They Work and Why They Are Used in Airplanes 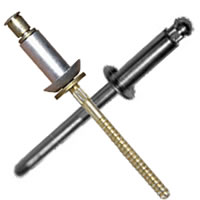 Airplanes are complex vehicles that require many different parts to manufacture. Some reports, in fact, suggest that a typical Boeing 747 contains roughly 6 million parts. While some of these parts are structural panels, others are fasteners. Blind rivets are a common type of fastener used in airplanes. What are blind rivets exactly, and why are they used in airplanes?

What Are Blind Rivets?

The body acts as a shell. It’s found on the top of a blind rivet. The stem, on the other hand, is the long and narrow rod to which the shell is connected. During installation, blind rivets are inserted through a hole using a riveting tool. This results in the body expanding while inside of the hole. The stem is then released from the body, leaving behind the expanded body to fasten the parts together. There are different types of blind rivets, but most of them consist of a body and a stem. These two components are assembled together, and they are used to secure multiple parts together.

Why Blind Rivets Are Used in Airplanes

Blind rivets offer a simple and effective solution for these hard-to-reach parts. They don’t require access to the back side to install. Rather, blind rivets are designed specifically for fastening applications in which there’s little or no access to the parts’ back side.