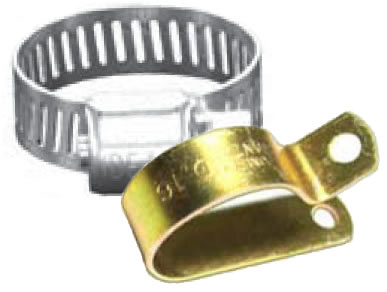 Hoses are commonly used in both automobiles and airplanes. Consisting of rubber tubes, they are designed to carry liquid — coolant, oil, etc. — to different parts. When connecting a hose to a part, though, a clamp may be required.

Clamps are fasteners that are designed to seal the end of a hose around the part with which it’s used.

What Are Worm Gear Clamps?

One of the most common types of hose clamps is worm gear. Also known as screw clamps, they feature a captive screw that’s secured to a band of material. Most worm gear clamps are made of metal. You can find them galvanized steel, stainless steel, aluminum and brass.

Installing a worm gear clamp requires placing it over the hose. Once placed over the hose, you can use a screwdriver to tighten the captive screw. Tightening the captive screw will pull the band of material so that it becomes smaller. A smaller band, of course, will result in a tighter connection around the hose.

What Are Spring Clamps?

To install a spring clamp, you’ll need to loosen it. Most spring clamps have two tabs on one end and a single tab on the opposite end. Using a pair of pliers, you can press these tabs together to loosen the spring clamp so that it becomes larger. You can then slide the spring clamp over the hose. After releasing the pliers from the tabs, the spring clamp will revert back to its original “clamped” position.