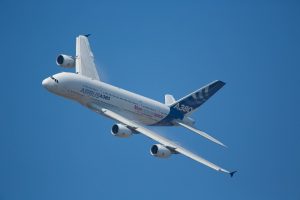 Originally introduced Oct. 25, 2007 with Singapore Airlines, the A380 is Airbus’s latest family of commercial jets. Featuring two decks and four engines, it’s touted as being the world’s largest commercial airliner, giving Airbus a competitive advantage over its top competitor, Boeing. But some aviation experts are skeptical regarding whether or not Airbus will continue to produce the A380.

Airbus Gains Footing With A380 in Persian Gulf

Forbes explains that Airbus has experienced “mixed success” with the A380. Thirteen years after launching the jumbo-sized jet, Airbus has generated 331 orders, 229 of which have been delivered. Those aren’t the worst sales numbers, but they aren’t particularly strong either. It’s also worth mentioning that 182 of these orders have originated from Qatar, Etihad, and Emirates Airways. So, while Airbus has sold a decent number of A380 units, more than half of these sales have originated from the Persian Gulf.

Aside from its limited market presence — focusing on the Persian Gulf — Airbus has encountered another problem with the A380. Reports show that Rolls-Royce is currently in a disagreement with some of the airlines that have purchased A380 units from Airbus. Rolls-Royce has been the primary supplier of engines for the A380 ever since Airbus launched the massive jumbo-sized jet more than a decade ago. Some airlines, however, have expressed the need for alternative engine options, meaning that existing orders for the A380 could be in jeopardy. If an airline doesn’t want a Rolls-Royce engine with the A380 and Airbus fails to provide a viable alternative, the airline could cancel its order.

It’s unknown what steps Airbus will take to correct these problems. The A380 certainly has some strong selling points that make it an attractive choice for airlines. According to Wikipedia, the A380-800 — one of the family’s main variants — has nearly 6,000 feet of floor space in the cabin. To put that number into perspective, that’s over 40% more floor space than the Boeing 747-8. The A380 is also capable of holding a lot of passengers. The A380-800 variant, for example, offers seating for up to 525 passengers in the three-class configuration and a staggering 853 passengers in the economy-class configuration.

Because of its massive size, though, the double-deck A380 comes with a hefty price tag of about $445 million per unit. Combined with disagreements between Rolls-Royce and airlines, this price could hinder Airbus’s ability to sell the new A380.