Why Do Some Airplanes Have 4 Engines? 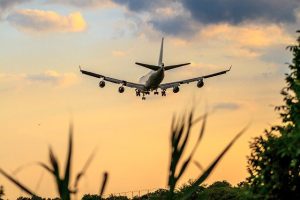 Airplanes rely on engines to generate propulsion. While wings and other flight control surfaces generate lift, engines are responsible for generating propulsion. Jet engines, for instance, suck in air through the front so that it can be burned with fuel. The byproduct gases are released out of the back, which propels airplanes forward. Most commercial airplanes, however, aren’t powered by a single engine; they are powered by four engines. Why do airplanes have four engines exactly?

Another reason airplanes have four engines is to increase thrust. Thrust is the force that engines use to propel airplanes through the air. For airplanes, it’s needed to overcome drag. All objects create drag as they move through the air — and airplanes are no exception. Fortunately, engines can overcome drag by the use of thrust. Jet engines create thrust by ejecting byproduct gases out of the back. As these byproduct gases are ejected, they’ll create thrust, which in turn generates propulsion. And the more engines an airplane has, the more thrust it will create.

There are also safety reasons why airplanes have four engines. Flying, of course, is statistically a much safer method of transportation than driving. Nonetheless, airplanes can still experience mechanical failure that can lead to accidents. Airplanes with four engines aren’t immune to mechanical failure, but they are less likely to experience an accident than those with fewer engines. If one of the engines fails, they’ll still have three other engines operational.

The number of engines airplanes have can vary. Some airplanes only have a single engine. Other airplanes have two engines. With that said, a four-engine configuration is particularly common. Airplanes often have two engines on each wing. It allows for a higher passenger capacity, increases thrust, improves safety and was previously required for transatlantic flights.

Need Hardware and Fasteners for your Airplane Engines?