Why Do Airplanes Travel in an Arc? 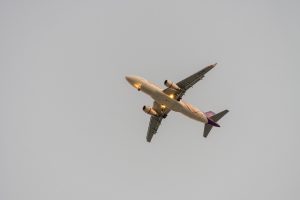 The next time you fly, whether domestic or international, take a look a look at the flight map. You may discover that your flight’s trajectory isn’t a straight line. Rather, it’s an arc that either angles up (North) or down (South) before changing direction halfway through. Also known as a great circle, this arc leaves many passengers confused. After all, conventional wisdom should lead you to believe that the shortest distance between two places is a straight line. So, why do plans travel in an arc instead of a straight line?

The reason planes travel in an arc is because Earth is three dimensional and maps are two dimensional. If you made a straight line between two locations, such as New York City and Paris, on a spherical, three-dimensional globe and then flattened globe into a two-dimensional map, the once-straight route would then be an arc. As a result, the shortest path between two locations is in fact an arc, thus the reason airlines prefer this trajectory.

Any by choosing the shortest possible flight trajectory, airlines save money in several ways. First, it takes less fuel to fly a short path rather than a lone one. Second, airlines pay less in employee expenses. And third, airlines are able to sell more tickets when they perform shorter flights. These are just a few reasons that airlines typically choose the shortest flight path, which is an arc.

Of course, other factors can affect a plane’s flight path, thereby forcing it to fly in a direction that isn’t a straight line or even a perfectly arced line. According to Smithsonian Magazine, there are more than 5,000 commercial planes flying in U.S. skies at any moment — and that’s not accounting for international or private flights. With so many planes in the air, airlines are often forced to change their trajectory to avoid midair collisions. It’s important to note, however, that trajectory changes due to air traffic such as this are small and insignificant when viewed on a map.

It’s no secret that airlines prefer the shortest flight paths to save money and improve efficiency. But seeing an arced route can leave passengers confused. As revealed here, though, an arc — when displayed on a flat map — is the shortest distance between two locations, so it only makes sense for airlines to use them.