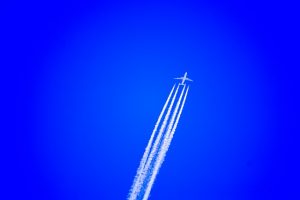 The next time you hear an airplane flying overhead, look up at the sky and you’ll probably notice a white trail of smoke in its wake. From small single-engine airplanes to large four-engine airplanes, all jet engine airplanes produce white smoke. It doesn’t stay in the sky forever. Rather, the white smoke will gradually dissipate over the course of a few hours. So, why do airplanes leave behind a trail of white smoke? In this post, we’re going to take a closer look at this phenomenon.

The trail of smoke left in the wake of jet-engine airplanes is colloquially known as a contrail. During flight, an airplane’s engine — or engines — will produce hot and humid air. As the engine burns a combination of fuel and air, it creates hot and humid air as a byproduct, which is expelled out the back of the engine. As this newly created hot and humid air mixes with the air outside the airplane, it creates the appearance of white smoke.

Airplanes fly at an average altitude of about 32,000 feet. At this altitude, the air is cool and not very dense. How does this affect the production of contrails exactly? Well, the air produced by a jet engine is warmer and more humid than this air. As a result, the mixing of these two types of air triggers various changes. The hot and humid air produced by the airplane’s engine mixes with the cool and dry air outside of the airplane, resulting in the formation of contrails. In other words, contrails are condensation in the sky that manifest as white smoke.

The Myth of Chemtrails

Some people mistakenly believe that the white smoke emitted by airplanes is chemtrails. Not to be confused with contrails, the term “chemtrails” refers to the theory that airplanes intentionally leave behind chemical or biological agents in the sky. It’s an age-old theory that’s led to a myriad of conspiracy theories. However, there’s no evidence that airplanes actually produce chemtrails. Rather, the white smoke created in their wake is condensation-based contrails.