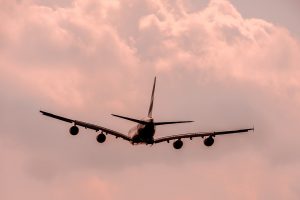 If you look at commercial airplanes — as well as many privately owned airplanes — you’ll probably notice that most have swept wings. In other words, their wings don’t extend straight out from the sides. Instead, they angle backwards to form a V shape. Generally speaking, the faster an airplane is intended to fly, the greater the angle of its wing sweep. So, what’s the purpose of swept wings, and is it really necessary for commercial airplanes?

The main reason airplanes have swept wings is to reduce turbulence. During flight, airplanes encounter turbulence from the friction created as air runs across the plane’s wings. The speed at which an airplane flies will affect the amount of turbulence is encounters. At faster speeds, airplanes encounter more turbulence due to the increased friction of the air running across its wings. In some cases, the air can travel faster than the speed of sound, resulting in heavily turbulence that’s not only a nuisance for passengers but also a danger to the aircraft’s structural integrity.

Swept wings, however, are designed to reduce turbulence by slowing down the air as it moves across the surface of the wings. As previously mentioned, swept wings are longer than straight wings. Therefore, air moves more slowly across them, which reduces the amount of turbulence the airplane encounters.

The concept of using swept wings to reduce turbulence was proposed at a conference in Germany during the 1930s. During the conference, Dr. Busemann explained that using swept wings could  counter the otherwise turbulent air encountered by airplanes flying at fast speeds. Since then, swept wings have become widely adopted and used in the commercial aviation industry.