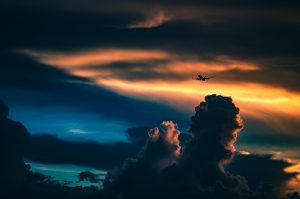 On its official website, the National Aeronautics and Space Administration (NASA) answered this burning question. As explained by NASA, airplanes are able to fly because of lift. Nearly every part of an airplane produces some degree of lift, but the wings are responsible for most of an airplane’s lift. An airplane’s wings are designed so that air moves faster over the top of the wings and slower under the bottom of the wings. The nuance between these air speeds results in a pressure difference that “lifts” the airplane, thereby allowing it to fly.

A main reason airplanes can’t fly in space is because there is no air. According to NASA, large commercial airplanes typically can’t fly higher than 7.5 miles. At this altitude, the air isn’t dense enough to support a large airplane. It may produce some lift, but it won’t be enough to prevent the airplane from falling down to a lower altitude where the air is denser. In space, of course, there is no air whatsoever. Without the presence of air, neither a large airplane nor a small airplane will produce lift. There’s simply no air to travel over and under an airplane’s wings in space, which is a main reason airplanes can’t fly in space.

Another reason airplanes can’t fly in space is because they require air to generate combustion. Jets, for example, burn a combination of jet fuel and air in their engines’ combustion chamber. As the jet fuel and air burn, it produces thrust to propel the jet through the air. This same principle applies to automobiles with a combustion gas engine. Cars, trucks and SUVs all use air as part of their combustion process. If an airplane flies in space, it won’t be able to suck in fresh air with which to supply its engines, resulting in loss of propulsion.

The bottom line is that airplanes can’t fly in space because there is no air in space. Airplanes rely on air to produce both lift and propulsion. Since there isn’t any air in space, airplanes must stay within the Earth’s atmosphere.