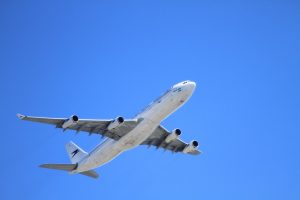 One reason that airplanes are manufactured with riveted joints instead of welded joints is because the aluminum materials used in their construction isn’t tolerant of heat. Most commercial aircraft are designed with an aluminum body. Not only is aluminum is inexpensive and readily available; it’s also lightweight. By using aluminum to construct airplane bodies, aerospace manufacturing companies can create lighter aircraft that are more fuel efficient than their counterparts made of other metals. But aluminum becomes weaker when exposed to heat, including the heat from welding, so most aerospace manufacturing companies prefer to connect joints using rivets.

The greatest benefit of using riveted joints in an aircraft is that they are stronger and more durable than welded joints. When two components are welded together, only the exterior of the components are joined together. On the other hand, using a rivet connects the two components from the inside, thus allowing for a stronger and more durable joint. This is particularly important for aircraft, as flying 550 mph at 30,000 feet above sea level places severe stress on the aircraft’s joints.

Riveted Joints Are Easier to Inspect

Riveted joints are also easier to inspect than welded joints. It only takes a quick visual inspection of a riveted joint to ensure that the two connected components are secure. With a welded joint, a machine or device must be used to test the joined components. There’s no easy or effective way to perform a visual inspection of a welded joint. Therefore, aerospace manufacturing companies use riveted joints to simplify both the production and maintenance process of their aircraft.

Even with riveted joints, some commercial aircraft still have some welded components. For the critical components of an aircraft’s body, though, rivets are preferred because of their ability to withstand extreme stress without breaking or otherwise succumbing to damage. It’s a safer and more effective way for aerospace manufacturing companies to build aircraft.

Need Rivets for your aircraft repair and maintenance?