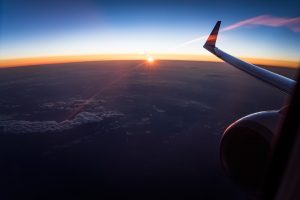 27% of all aluminum consumed occurs in the transportation industry, according to Aluminum Leader. This chemical element in the boron group is characterized by a silver-white color and soft, ductile texture. While it’s used in many different applications, one of the most common is aerospace. In fact, aluminum is one of the most common materials used in the construction of airplanes. So, why is aluminum used for this purpose instead of steel or other materials?

Some of the first airliners weren’t made of metal, but instead were made of wood. Although cheap and readily available, wood has a serious flaw that made it hazardous in airplanes: it rotted. There was one instances in which a wooden airliner crashed, killing everyone on board. The cause of the crash was later found to be rotten wood. This prompted manufacturers to quickly phase out wood in favor of metal.

Aluminum is the perfect material to use when manufacturing airplanes, thanks in part to its unique properties and characteristics. It’s strong, lightweight, predictable and inexpensive. Steel and iron are both stronger than aluminum, but strength alone isn’t enough to justify its use in aerospace manufacturing. The problem with steel and iron is its weight. Both of these metals are much heavier than aluminum — and too much weigh restricts an airplane’s ability to takeoff and fly.

It’s estimated that up to 80% of the materials used in modern-day aircraft is aluminum. The Wright brothers used a steel engine in their early-model Flyer plane, which was not only heavy but lacked the power necessary for takeover. As a result, they acquired a special engine made of cast aluminum, which allowed their Flyer-1 to takeoff with ease.

There are several different types of aluminum used in aerospace engineering, some of which include the following:

Note: the number refers to the aluminum’s “grade.”

Of course, aluminum isn’t the only metal used to manufacture airplanes. Carbon-alloy steel is often used for his application as well. When carbon is added to steel, it becomes stronger and more resistant to rust and corrosion. Titanium is another metal that’s commonly used in aerospace engineering. It’s strong, lightweight, and naturally resistant to corrosion. Some companies alloy titanium with iron or manganese to construct the frame and engines for airplanes. These use of these metals, however, is typically less than that of aluminum. Aluminum isn’t the strongest metal, but it maintains a perfect balance of strength and low weight that make it ideal for airplanes.