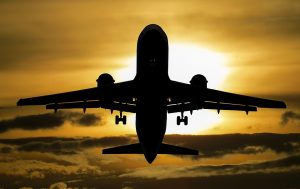 Normally, extended wing flaps are retracted back to their original position once the jet has reacted cruising altitude. This is done to reduce drag against the jet. With the wing flaps extended, there’s greater drag, thereby slowing the jet down. Even if the loss of speed isn’t enough to make a jet fall out of the sky, it will still force it to consume more fuel. Therefore, most pilots retract the wing flaps after takeoff, allowing for a faster, more efficient flight.

Extended wing flaps are a feature found on most commercial jets that allows for easier takeoffs and landings. They work by using a specific angle to push the plane upwards. Once the jet has reached cruising altitude, the pilot will typically retract the wing flaps back to their original position.