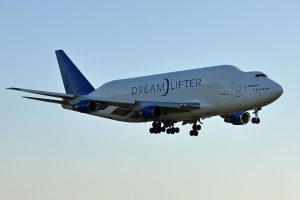 Have you heard of the Dreamlifter? Designed and manufactured by Boeing, it’s a massive wide-body jet that’s used to transport cargo. The Dreamlifter was introduced in 2007, and since then, it has become one of the market’s leading cargo jets. To learn more about the Boeing Dreamlifter, keep reading.

As shown in the adjacent image, the Boeing Dreamlifter is a wide-body cargo jet. It has approximately 65,000 cubic feet of cargo space, offering a substantial amount of storage space for commercial airlines. To put the size of its cargo hold into perspective, the Dreamlifter can transport up to three times the volume of cargo than a traditional 747-100F jet.

Boeing originally announced the Dreamlifter back in the early 2000s. Of course, the aerospace manufacturing company encountered several hurdles when designing the wide-body cargo jet. In 2003, for instance, Boeing discovered that the 787 parts were too large for the Dreamlifter, so it began using parts from 747-400 instead. After rigorous testing and certification, Boeing officially introduced the Dreamlifter in 2008.

With an estimated program cost of $1 billion, the Dreamlifter isn’t cheap by any means. However, it boasts some impressive specifications and features that make it an attractive choice for commercial airlines in need of a cargo jet. In terms of size, the Dreamlifter measures over 235 feet long and 70 feet tall. It also has a maximum takeoff weight of over 803,000 pounds as well as a cruising speed of Mach 0.82.

It’s important to note that Airbus is still testing the Beluga XL, meaning it isn’t available for commercial airlines to purchase and use. With that said, Airbus is expected to release the Beluga XL in late 2019 or early 2020.