What Happens If an Airplane’s Engine Fails During Flight? 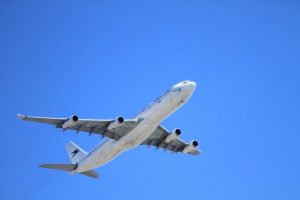 Research shows flying is approximately 19 times safer than driving. There are over 260 million registered passenger vehicles in the United States, so the risk of a collision when driving is naturally greater than that of flying in an airplane. Airplanes can still fail, however. There are have been instances in which commercial airplanes’ engines have stopped working during flight. So, what happens when an airplane’s engine fails exactly?

Most commercial airplanes aren’t powered by a single engine. Rather, they feature multiple engines to safeguard against failure. The Airbus A380 and Boeing 747, for example, are powered by four jet engines. Some commercial airplanes, in fact, have six engines. Each engine works independently from the others. Therefore, if one of the engine’s fails, the others will continue to operate.

With that said, there have been times when all of an airplane’s engines have failed. A common example if the Hudson River landing during which Captain Sully Sullenberger was forced to make an emergency water landing after both of his airplane’s engines have failed. With no deaths or major injuries, it was a miraculous story that even inspired the production of a movie. Regardless, instances in which multiple engines fail simultaneously during flight are few and far between. The Hudson River landing was a rare occurrence that only occurs once in a blue moon.

Airplanes Can Glide After Engine Failure

Even if some or all of an airplane’s engines fail, it can still safely glide while descending in preparation of an emergency landing. An airplane won’t just drop to the ground after its engines fail. Airplanes are designed with long wings to create lift, which essentially holds them in the air.

Airplanes are designed with sensors in the cockpit that notify the pilot when an engine fails. Once the sensor goes off, the pilot will begin to perform the steps for an emergency landing. Among other things, this means descending to a lower altitude and, potentially, reducing the airplane’s speed.