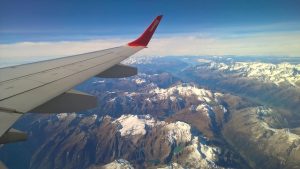 Most airplanes aren’t designed with a flat, smooth tail. If you inspect the tail on a typical commercial jet, you’ll discover several different adjustable components, including elevators. Most airplanes have at least two elevators on their tail. From inside the cockpit, pilots can control the elevators to raise or lower them. What are tail elevators on airplanes exactly, and what purpose do they serve?

Tail elevators are essentially thin horizontal flaps that are connected to an airplane’s tail. Pilots can raise or lower them to adjust the airplane’s pitch. In other words, tail elevators can move up or down, which in turn allows the plane to move and down.

When most people hear the word “elevator,” they envision a traditional elevator in a multi-story building. While that’s certainly one type of elevator, another type is a flight control component. Airplanes are designed with tail elevators that allow pilots to control the airplane’s pitch. Pilots can raise or lower the tail elevators. In response, the airplane’s pitch will adjust accordingly. Hopefully, this gives you a better understanding of tail elevators and how they work in airplanes.

NASA and Google to Explore Arctic for Mars Research