What Are Drain Valves and Why Do Airplanes Need Them? 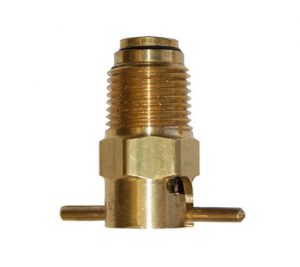 Drain valves are small parts that play a big role in the safety and performance of modern airplanes. Most airplanes feature multiple drain valves. What are drain valves exactly, and why do airplanes need them?

Drain valves are parts that are designed to remove excess fluid — as well as sample fluid for testing purposes — from a closed system. They are commonly used in fuel and oil systems.

Like all valves, drain valves can change the direction in which fluid travels. You can find drain valves in different types. Nonetheless, they all feature some type of mechanism to control the direction in which fluid travels. Some drain valves simply act as plugs. You can twist them into an opening to close the fluid system. And to drain the fluid system, you can turn them counterclockwise, thereby removing them from the system. Gravity will then force the fluid to drain out of the system.

Airplanes need drain valves for several reasons. In fuel systems, drain valves allow for sample collecting. Fuel samples are often collected and tested before flight to check for water. Allowing water to enter an airplane’s fuel system could result in damage to its engines or other components. The presence of water in the fuel system could also be a sign of a bigger underlying problem. With a drain valve, maintenance workers can collect a sample of the fuel to test it for water.

Fuel tanks must also be regularly cleaned. Before cleaning an airplane’s fuel tank, maintenance workers must drain it. Drain valves simplify this process. Maintenance workers can release the drain valve connected to the fuel tank to quickly and easily drain all of the fuel from it.

Oil systems often feature a drain valve as well. Like automotive oil, the oil used in airplanes must be changed on a regular basis. Oil contains chemicals and compounds that are designed to protect moving parts from friction-related damage. Over time, these chemicals and compounds will degrade. Therefore, maintenance workers must remove the old oil and replace it with new oil.