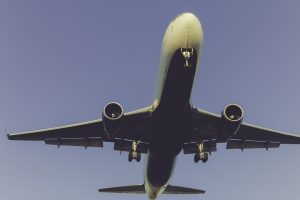 Nearly 2 million Americans travel via commercial flight every year in the United States, according to the Bureau of Transportation Statistics. Of course, there are certain advantages to air travel, such as a lower risk of injury, speed and convenience. However, it may also pose a risk to your health, as certain areas in airplanes are a haven for germs. Time recently investigated this topic by revealing some of the dirtiest places on airplanes.

According to a study cited by Time, travel tables have 800% more bacteria that buttons in airplane bathrooms. This is likely due to the combination of food particles and improper cleaning. So, the next time you get ready to use the tray table, you may want to clean it with some hand sanitizer first.

Another somewhat surprising dirty place on airplanes is the seat belt buckles. With each passenger — and sometimes flight attendants — touching the seat belts, it creates the perfect breeding grounds for germs. This doesn’t mean you should avoid using your seat belt, but rather clean it prior to touching it.

Of course, airplane restrooms are also notorious for being dirty. One researcher suggests that airplane bathrooms are dirty because of the water cut-off feature used in the sink faucets. Airplanes typically use a faucet feature that automatically shuts off water after just a few seconds in an effort to conserve water. Therefore, passengers aren’t always able to completely wash their hands before leaving, resulting in germs being transferred to door knobs, paper towel holders and other areas.

The good news is that most major airlines clean their lavatories on a regular basis. United, American Airlines and Delta say they clean all restrooms between long flights.

You know the pockets on the back of airplane seats, where magazines are often stored? Well, they too are a magnet for germs. A study conducted by researchers from Auburn University found that germs such as MRSA can survive for up to a full week on the cloth fabric of seat pockets.

Finally, seats in the middle of the aisle are considered far more dirtier than their exterior/window counterparts. This is presumably because passengers rest their hands on aisle seats while walking down the aisles. Even if a passenger doesn’t sit in an aisle seat, he or she may still touch them when walking by.