The Beginner’s Guide to Grommets: What You Should Know 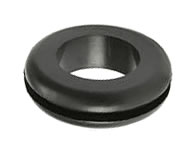 When shopping for aerospace parts, you may come across grommets. Not to be confused with eyelets, they are used to create finished holes. There are different types of grommets. Some of them are made of plastic, whereas others are made of synthetic rubber. They are also available in different sizes. Regardless, all grommets consist of a ring that’s used to create a finished hole.

Airplanes feature a variety of panels. To run hoses or other parts through them, holes are required. Manufacturers will cut holes into these panels, after which they’ll use grommets to finish the holes. Grommets essentially create finished holes. Each grommet will fit into a hole, thus creating a finished hole with a padded perimeter.

How Grommets Are Used in Airplanes

One of the most common applications for grommets in airplanes is to run wires. Airplanes have complex electrical systems that involve the use of wires. Some of these wires are used to power devices like flight instruments, whereas others are used to transmit data. When running a wire through a panel, a grommet may be used.

Grommets protect wires from damage such as this by creating a finished hole. Most grommets are made of a soft material, such as plastic or synthetic rubber. As a result, they won’t damage wires. Wires can rub against a grommet without sustaining damage.

Grommets are rings that are used to create finished holes. They are placed into precut holes. In airplanes, grommets are used to run wires through panels and to seal drains.