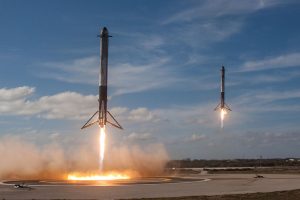 SpaceX has successfully launched its new Falcon Heavy rocket. Featuring three reusable boosters, the new rocket lifted off from Cape Canaveral, Florida on February 6, 2018 with a Tesla Roadster payload (no, that’s not a typo). In an effort to test the new Falcon Heavy rocket, SpaxeX founder and CEO Elon Musk decided to launch the Roadster as the Falcon Heavy’s first payload, sending it on a path straight to Mars.

Prior to the Falcon Heavy’s launch, Musk said he was concerned that the rocket would explode with the force of some 4 million pounds of TNT. Thankfully, this didn’t happen, as the Falcon Heavy cleared the launchpad while lifting the Roadster into orbit.

“That was probably the most exciting thing I’ve ever seen — literally ever,” Musk said at a press conference after the launch. “It taught me crazy things can come true. I didn’t really think this would work.

As shown in the image to the left, the Falcon Heavy features two reusable outer boosters, both of which successfully returned to the launchpad. About halfway through the launch, the two outer booster broke away from the inner booster and gracefully touched down about 1,000 feet apart on the launchpad.

The inner booster was supposed to land on an autonomous drone ship off the Atlantic coast. However, it missed its mark and crashed into the ocean at speeds of 300 mph. When speaking about the failed inner booster, Musk told reporters that it didn’t have enough propellant to return safely to the ship.

Because of the Falcon Heavy’s successful launch, there’s now a Tesla Roadster floating around in space. It contains a dummy wearing a spacesuit with multiple cameras attached to the sides. Musk has already captured photos of the Roadster as it flies by Earth, which he’s published online. The photos may seem fake or otherwise photoshopped, but rest assured they are not. There’s really a Tesla Roadster floating around in space, and Musk has captured photos of it.