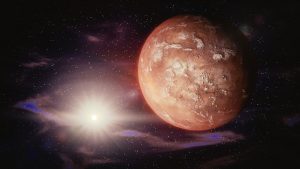 NASA has its crosshairs fixed on the Red Planet. In November, the space agency’s InSight spacecraft touched down on Mars. Considering that Mars is almost 34 million miles away from Earth, that alone is an impressive feat. However, NASA is now preparing to take advantage of InSights new home. According to NASA, Insight will now study the Mars surface and atmosphere, collecting and relaying this invaluable data back to NASA engineers here on Earth.

Of course, NASA didn’t choose just any landing destination for the InSight spacecraft. On its official website, NASA explained that engineers chose an area around Mar’s equator where the terrain is flat. Not surprisingly, flat terrain allows spacecraft to land more easily while reducing the risk of crashing in the process.

“InSight’s team selected a location on Mars’ equator called Elysium Planitia – as flat and boring a spot as any on Mars. That makes landing just a bit easier, as there’s less to crash into, fewer rocks to land on and lots of sunlight to power the spacecraft. The fact that InSight doesn’t use much power and should have plenty of sunlight at Mars’ equator means it can provide lots of data for scientists to study,” wrote NASA on its official website.

What’s truly remarkable about NASA’s InSight spacecraft, though, is that it’s able to perform these data gathering and relaying processes from a single, static location. When NASA sends probes and rovers to the Red Planet, they typically move around the surface or in orbit, all while gathering and relaying data. But InSight was designed for a different purpose. NASA says that InSight will remain in a single location.

You might be wondering why InSight won’t move around like other rovers on the Red Planet. Well, NASA says that InSight’s primary goal is to detect “geophysical signals” within Mars’s core. The Red Planet is believed to have earthquakes — known as Marsquakes — just like we have here on Earth. Using InSight, NASA engineers can detect these Marsquakes, measuring their strength, duration, location and other critical information that can be used to better understand the Red Planet.

If InSight moves around, it won’t be able to collect geophysical signals as effectively as it can now. This led NASA engineers to conclude that the InSight spacecraft should remain in a fixed location during its time on Mars. Now that it’s found its new home, InSight is in the process of gathering data on the Red Planet and sending it back to NASA engineers.