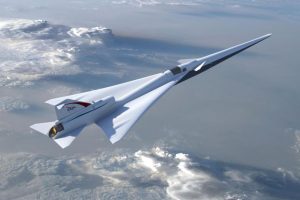 The National Aeronautics and Space Administration (NASA) and Lockheed Martin are looking to produce a new airplane that’s capable of flying faster than the speed of sound. Dubbed the X-Plane, it could possible transform the way in which we travel.

While there are already hypersonic airplanes — some can reach 2.35 times the speed of sound — the X-Plane seeks to solve a major hurdle: the sound. Ironically enough, hypersonic airplanes produce a loud “boom” when they reach speeds in excess of 761 miles per hour, the speed of sound. Known as a sonic boom, it’s a substantially loud noise that’s strong enough to shatter nearby windows and other glass structures. And because of this, hypersonic air travel has been nothing more than a concept.

NASA and Lockheed Martin, however, are hoping to overcome this problem with the X-Plane. The proposed hypersonic jet is intended to fly faster than the speed of sound while producing minimal noise in the process.

Earlier this year, NASA and Lockheed Martin tested a scaled-down model of its X-Plane in wind tunnels at NASA’s Glenn Research Center. This eight-long test allowed researchers to measure specifications like lift, drag and side force. Although it was scaled down model, the prototype was able to achieve speeds of 150 to 900 miles per hour. This test confirmed that a larger and more practical version of the X-Plane is possible.

Unfortunately, it may be a while before we see hypersonic jets in the skies. NASA isn’t expected to test the X-Plane until 2021. And even then, it will likely require several additional years of testing, observation and tweaking before it’s deemed for passengers.

“NASA has been working for decades, essentially, on looking at technologies to take the ‘boom’ out of ‘boom,‘” says Peter Coen, NASA’s Commercial Supersonic Technology Project manager. “We’d like to have sonic thump or just sonic sound. The idea is to design the airplane so that the shock waves that are produced in supersonic flight are arranged in such a way that you just have a gradual pressure rise which produces a quiet sound.”

Commercial jets currently fly at about 450 to 550 miles per hour. Assuming the X-Plane is a success, it could potentially fly at nearly twice this speed. According to Coen, supersonic commercial flights such as this could cut air travel times in half.

What do you think of hypersonic commercial flights? Will it be the future of air travel?