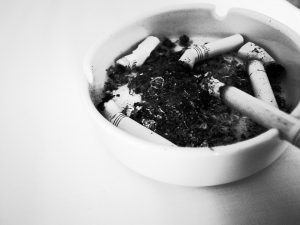 This is a question many air travelers ponder. In the past, it was perfectly normal for passengers to smoke cigarettes or cigars during mid-flight. However, the Federal Aviation Administration (FAA) banned smoking on all domestic flights with a travel time of two hours or less. And by the turn of the 21st century, the FAA banned smoking on all flights. This begs the question: why do airplanes still have ashtrays if smoking is prohibited?

Granted, you won’t find ashtrays installed in your seats like they were prior to the FAA’s smoking ban. Instead, ashtrays are typically found on the lavatory doors. Featuring a discreet design along with the universal smoking symbol, some passengers may assume that it’s okay to smoke. In reality, though, smoking has been banned on all U.S. flights since the late-1990s.

Even though smoking is still banned on all U.S. flights, you’ll still find two ashtrays installed inside and outside of every lavatory door. This is actually a safety feature that’s designed to prevent fires aboard flights. While smoking is prohibited on airliners, some people inevitably disobey this law, which can create a dangerous situation when you’re flying at an altitude of 39,000 feet. A passenger, for instance, may light a cigarette, and after he or she is finished, place it in the trash or flush it down the toilet. Scenarios such as these can prove disastrous aboard flights, which is why the FAA actually requires airliners to have ashtrays. If a passenger chooses to smoke, he or she can safely extinguish the cigarette into the ashtray.

Title 14 of the Code of Federal Regulations specifically states the following: “Regardless of whether smoking is allowed in any other part of the airplane, lavatories must have self-contained, removable ashtrays located conspicuously on or near the entry side of each lavatory door.”

Furthermore, the ashtrays on commercial airliners must also be functional. According to CNN, if more than half of an airliner’s ashtrays are broken, the airline must repair them within 72 hours; otherwise, they could face fines.

So, what happens if a passenger violates this law and chooses to smoke during mid-flight? Penalties vary depending on the circumstance and jurisdiction. However, passengers who smoke typically face a fine of up to $5,000 as well as the possibility of arrest and detention upon landing. In some cases, the airliner may land early to have the smoker escorted off the plane.