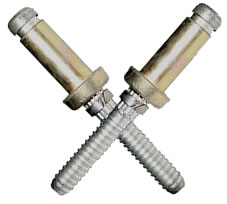 What Are Huck Bolts?

To install a huck bolt, you’ll need to use a special tool known as a huck gun. A huck gun will force the material of the collar to wrap around the bottom part of the pin. Huck bolts are twisted into a precut hole. Once in place, a huck gun is used to secure the huck bolts in place.

Huck bolts are better protected against loosening — particularly loosening caused by vibrations — than standard bolts. When installed with a huck gun, huck bolts have a swaged collar. The bottom part of the pin will essentially protrude around the underside of the material into which the huck bolt is installed. This swaged collar will protect the huck bolt from loosening.