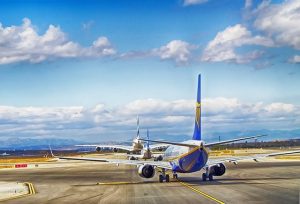 Pilots primarily use a control mechanism known as a “tiller” to steer airplanes on the runway. While often used to describe a soil-shuffling garden tool, the term “tiller” is also used to describe a control mechanism found in the cockpits of many commercial airplanes. The tiller typically resembles an automotive steering wheel, and like regular automotive steering wheels, turning it results in a change of direction. If the pilot wants to steer the airplane left, he or she can turn the tiller to the left.

During takeoff, pilots use other control mechanisms to steer airplanes. They’ll typically still adjust the tiller to ensure the airplane is aligned with the runway, but they other steering techniques as well, including throttling. With throttling, the pilot can control the amount of power produced by the engines. While this doesn’t necessarily change the direction of airplanes, it allows pilots to achieve and maintain an appropriate speed.