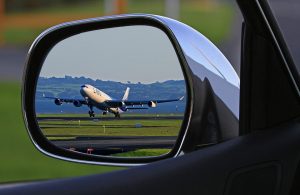 If you’ve ever flown on a commercial airliner, you’re probably well aware of the current ban on the use of cellphones during flight. Many airlines request passengers turn off their mobile phones and other electronic devices during the take-off and landing, believing it may interfere with their communications systems.

However, the days of not using cellphones during takeoff and landing may soon come to an end. Recently, the Federal Aviation Administration (FAA) announced that it was considering allowing in-flight cellphone calls. Granted, it hasn’t happened yet, but it may soon happen. The long-standing ban was implemented in an effort to reduce signal interference in the air and on the ground. These technical issues have since been addressed, however, with the FAA reevaluating this age-old ban and whether or not it’s really necessary.

When you’re flying 10,000+ feet in the air, your cell phone signal must hit and bounce off multiple towers; thus, it creates a stronger signal. And with these strong signals, there’s some belief that it could congest communications network, which would subsequently interfere with the airplane’s ability to communicate with towers on the ground and other airplanes in the air. With that said, however, there has never been a single instance in which a cell phone caused a plane to crash.

The European Aviation Safety Agency (the FAA of Europe) even announced back in 2014 that cellphones and electronic devices pose no safety risk. Other countries have followed suit, making similar statements in regards to cellphone usage during flight.

It’s important to note, however, that the FAA isn’t responsible for the existing ban on cellphone usage. Technically, the Federal Communications Commission (FCC) regulates this activity, prohibiting the use of voice communications on cell phones. The FAA leaves this decision up to the airline, allowing for the use of “Any other portable electronic device that the operator of the aircraft has determined will not cause interference with the navigation or communication system of the aircraft on which it is to be used.”

So, will the ban on cellphones during takeoff and landing be lifted? It’s still early to make any definitive statements, but most professionals in the aviation industry believe the answer is yes. It’s not a matter of if the ban will be lifted but when. Until that happens, though, passengers should follow the FCC’s current law, which prohibits the use of voice communications. And if the airline has any special requests, passengers should follow those as well.