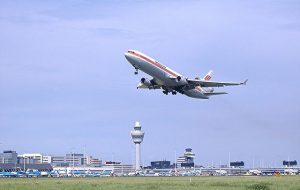 Many people assume that airplanes take off into the wind. After all, conventional wisdom should lead you to believe that wind creates resistance. If an airplane takes off against the wind, you may assume that it encounters greater resistance. Taking off into the wind, on the other hand, would result in less resistance — at least that’s the common belief. The truth is that most airplanes take off against the wind.

The Science Behind Against-the-Wind Takeoffs

Airplanes take off against the wind to generate more lift. There are several forces that act against airplanes, including thrust, weight, drag and lift. Lift is the invisible force that works against the weight of an airplane to prevent it from falling out of the sky. All airplanes generate lift. Most of an airplane’s lift is generated by its wings. As air flows under the wings, it pushes the airplane up.

It’s important to note that wind shear can prove hazardous for pilots and passengers. Wind shear is a fast and horizontal change of airflow. Pilots must take into wind shear when taking off. While an against-the-wind takeoff may help to generate more lift, some pilots may avoid it if the wind shear is too strong.

Pilots must account for numerous factors when taking off, one of which is the direction of the wind. If a pilot takes off into the wind, airplanes will generate less lift. Against-the-wind takeoffs allow for more lift by encouraging air to move faster under an airplane’s wings. In turn, pilots can achieve “wheels up” more quickly.