Did You Know? How Airplanes are Protected from Lightning 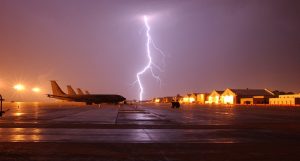 Lightning strikes the Earth approximately 25 million times per year, according to a report published by The Weather Channel. With temperatures reaching up to 1800 degrees Fahrenheit, these strikes can cause serious damage, igniting homes, structures, trees and more. But why aren’t airplanes affected by lightning strikes? With some 5,000 airplanes flying over United States airspace at any given time, conventional wisdom should tell you that at least some would get struck by lighting.

Well, airplanes aren’t necessarily protected from lightning strikes. Statistics show that a typical commercial airliner is stuck by lightning once per year. The good news is that modern-day airplanes are designed to minimize the impact of suck strikes, protecting both the aircraft and its passengers. The last time lightning caused an airliner to crash was back in the 1960s — and even that was a result of an exploding fuel tank. So, why doesn’t lightning cause more damage to airplanes?

Airplanes today must pass a strict series of lightning certification tests to ensure they are protected from lightning damage. Pilots, crew and passengers may notice flashes of lightning outside the window, or even a bolt of lighting striking the aircraft itself, but it rarely causes any serious damage. This is because modern-day airplanes are designed so that electricity travels through them, without any interruption.

The outer shell of a typical airplane is made of aluminum. Aluminum offers several benefits when used in aerospace engineering: it’s strong, lightweight, readily available, and predictable. Moreover, it’s an excellent conductor of electricity, making it ideal for use in lightning-prone aircraft. When a bolt of lightning strikes the exterior of an airplane, the electricity travels into the aluminum shell and out through another point on the aluminum. Most airplanes still avoid lightning storms when possible, but if a lightning strike occurs, everyone on board can rest assured knowing that it’s not going to cause damage.

However, there’s also the possibility of damage to electronics systems and flight instruments from lightning strikes. To protect against this phenomenon, airplanes are equipped with shielding and suppressors, while all vital components must meet the Federal Aviation Administration’s (FAA) regulations. This further protects the airplane from potential damage caused by lightning strikes.

To recap, lightning does in fact strike airplanes in mid-air. It typically causes no damage, however, because the lightning simply travels into and out of the airplane’s aluminum shell.