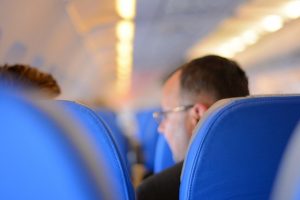 Have you ever experienced a nosebleed either during or shortly after a flight? Well, you aren’t alone. Millions of passengers have developed a nosebleed from flying. It’s an all-too-common condition that’s become synonymous with flying. Unbeknownst to many passengers, though, there’s a good reason — actually two reasons — nosebleeds are so common when flying.

When flying in an airplane, you’ll be exposed to pressurized air. Commercial airplanes typically fly at an altitude of 31,000 to 38,000 feet. At this altitude range, the air is significantly thinner than that of the ground. To provide passengers with a sufficient amount of oxygen, as well as create a comfortable flight experience, commercial airplanes are designed with pressurized cabins. As the airplane ascends and gains altitude, the cabin becomes pressurized. Depending on the specific type of airplane, the cabin may reach 11 or 12 pounds per square inch (PSI) of pressure.

While a pressurized cabin is essential to creating a safe flight experience, it may cause nosebleeds. The change of pressure causes the blood vessels in your nasal passages to swell and contract. If a blood vessel happens to burst during this process, it may cause a nosebleed.

In addition to cabin pressure, dry air is another factor that increases the risk of nosebleeds when flying. You might be surprised to learn that cabin air significantly drier than outdoor or indoor air on the ground. According to the World Health Organization (WHO), most airplane cabins operate with a relative humidity of 20%. What does this mean exactly? At 20%, the air inside an airplane’s cabin is one-fifth saturated with water. In other words, the air contains 20% of the maximum amount of water it can hold at the air’s current temperature.

A relative humidity of 20% is exceptionally dry, however. Most homes have a relative humidity of 40% to 60%, which is considered average. As a result, flying will expose you to dry air that may manifest in the form of a nosebleed. When you’re flying aboard an airplane for a long period, the low humidity will cause your nasal passages to dry out. Depending on the severity of the dryness, your nasal passages may crack open and bleed, resulting in a nosebleed.

If you’re concerned about dry air causing a nosebleed, make sure you drink plenty of water before, during and after your flight. By staying hydrated, your body will have an ample amount of moisture to protect your nasal passages from the cabin’s low humidity.

You probably won’t develop a nosebleed each time you fly. With the pressurized cabin and dry air, though, there’s certainly a risk that it will occur.