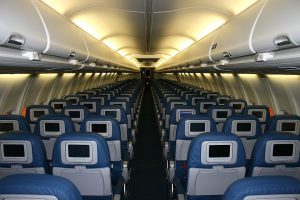 Researchers at Brigham Young University (BYU) are on a quest to solve a decades-old problem encountered by passengers when flying on an airplane: loud lavatory toilets. Because lavatories use high-efficiency vacuum toilets, they require minimal water to operate. As a result, airlines don’t have to consume valuable weight on water. They can add more passengers to cargo to their airplanes instead of wasting that weight on water.

But the vacuum toilets found in modern-day airplanes come with an unwanted side effect: noise. If you’ve ever used the lavatory during flight, you may recall hearing a loud noise as the vacuum toilet flushes the water. In an effort to solve this problem, a team of BYU researchers are investigating new technologies to suppress the otherwise loud noise of lavatory toilets.

According to BYU researchers, the vacuum toilets in airplane lavatories use a combination of both air and water that, when flushed, travels at speeds up to 300 miles per hour. When the air and water mixture is disrupted during a flush, it generates noise — a loud noise that’s easily heard by passengers throughout the aircraft, even those who aren’t near the lavatory when it’s flushed.

To suppress the noise produced by airplane lavatory toilets, BYU researchers performed several modifications. First, they installed extra pipes so that water had to travel farther from the toilet to the flush valve. Second, BYU researchers replaced the traditional L-shaped pipe attachment in the toilet bowl with a more curved attachment. While these changes sound subtle, they apparently paid off. BYU researchers said that increasing the distance of the pipes and installing a more curved toilet bowl pipe attachment resulted in a sound level of just 16 decibels during flushes.

When speaking about the project in a press release, Scott Sommerfeldt explained that airlines have had noise standards for lavatory standards, but little has been done to comply with those standards. And because of recent advancements in cabin designs, lavatory toilets are now louder than ever.

“Airline companies have always had standards for the toilet noise, but they’ve never met those and there has never been much pressure to do so,” said BYU researcher Scott Sommerfeldt. “Now with the reduced cabin sound levels, the sound of the toilet flushing is more noticeable and customers are pushing back.”

Whether aerospace manufacturers adopt the new, quieter toilet design remains to be seen. Regardless, though, BYU researchers were able to significantly reduce the noise level of lavatory toilets by making just a few small modifications to them,