Are Self-Piloting Planes the Future? 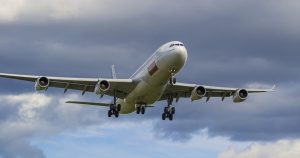 Some of the world’s biggest tech companies are working to develop self-driving cars, including Google, Apple and Tesla. Self-driving cars would revolutionize the way in which we commute, reducing collisions and traffic congestion. But self-driving technology isn’t limited strictly to the roads; according to a report published by Fast Company, Airbus is currently developing a prototype of an electric self-piloting single passenger plane.

Last December, Airbus released two concept images for its proposed self-piloting plane dubbed the “Vahana.” The first image depicts an electric-powered helicopter, while the second image reveals a plane with wings that can tilt upward and perform full-vertical take offs and landings. Fast Company claims that Airbus has decided to produce the latter, which features tilting wings. Airbus chief engineer Geoffrey Bower confirmed these rumors by saying “The vehicle is being built. Parts are being made as we speak.”

So, how far would Airbus’ new Vahana self-piloting plane be able to fly? Being that it’s self-piloting and uses an electric power source, distance is somewhat limited. Current reports indicate that it would have a maximum per-flight distance of 50 minutes. On the plus side, however, the combination of eight propellers and two sets of wings offers exceptional maneuverability, allowing the Vahana to traverse through densely packed urban landscapes.

Airbus is actually working in conjunction with NASA to develop the Vahana. The company needs several components to turn this vision into a reality, and it hopes to acquire those components from NASA. When speaking about the project, NASA’s lead aviation technology researcher Mark Moore said it’s a very good approach.

“There has not been any quantum leap,” says CAFE Foundation executive director Yolanka Wulff. However, “[Batteries] have been steadily improving, and they are significantly better than they were in, say, 2008,” she adds. Today’s lithium-polymer batteries can hold a hefty 200 watt-hours per kilogram, and Moore thinks it could go as high as 350 in five years. “That’s perfectly conditioned in order to be doing these shorter range, urban, VTOL missions.”

When can you expect to see the self-piloting Airbus Vahana flying in the skies? Reports indicate that test flights will begin sometime this year, though a specific date has yet to be announced.

The Vahana receives its namesake from the mounts used by gods in Hindu mythology.