An Introduction to the Different Types of Rotorcraft 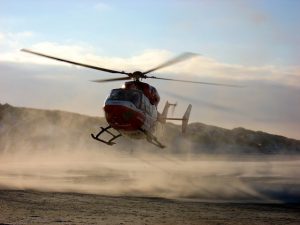 Not all types of aircraft generate lift with horizontal and fixed wings. While most jet and propeller aircraft do, in fact, have horizontal wings, there’s another group of aircraft that rely on rotor blades or rotary wings to generate lift. Known as rotorcraft, they are often used for short-distance flights. This post offers an introduction to the different types of rotorcraft.

The most common type of rotorcraft is a helicopter. Even if you’re unfamiliar with rotorcraft, you’ve probably seen a helicopter before. Helicopters are aircraft that feature engine-driven rotor that spins during flight. With their spinning rotor, they can fly forwards, backwards, upwards and downwards. The word “helicopter” comes from the French language meaning “helix” or “whirl.” which is essentially how they operate. All helicopters have a spinning rotor that produces lift while simultaneously allowing pilots to control the helicopter.

While not as common as helicopters, autogyros are another type of rotorcraft. What is an autogyro exactly? Also known as a gyrocopter, they consist of an unpowered rotor. Most autogyros still have an engine-powered propeller. The rotor, however, is powered naturally by aerodynamic forces. Autogyros have been around since the early 1900s. They look similar to helicopters, but they gave a simpler design that’s characterized by the use of an unpowered rotor.

A gyrodyne is another type of rotorcraft. It’s considered a vertical takeoff and landing vehicle (VTOL) that, like all VTOLs, can take off and land vertically. Gyrodynes feature an engine-powered rotor. With their engine-powered rotor, they operate much like helicopters. Gyrodynes don’t require a long runway to take off or land. As VTOLs, they can take off and land vertically while a minimal amount of runway space. The main difference between gyrodynes and helicopters is that the former features an auto-adjusting rotor that reduces the risk of stalling and other problems associated with helicopters.

Finally, a roto kite is a type of rotorcraft that generates lift by using an unpowered rotor. Some of them have one or more engines. The engine or engines, however, doesn’t power the rotor. All roto kites have an unpowered rotor, which his one of the features that distinguishes them from helicopters. Some roto kites, in fact, are devoid of engines. Without any engines, they are typically released into the air from another, larger aircraft. After being released, the roto kit’s rotar will spin while generating lift. Roto kits are the simplest type of rotorcraft in this regard.