An Introduction to the Airbus A220 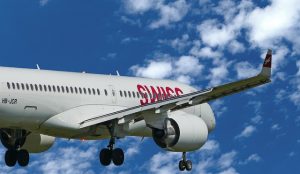 The A220 is a family of narrow-body airplanes produced by Airbus. It was originally designed by Bombardier Aerospace under the name “Bombadier C Series.” In 2018, however, Airbus purchased a majority stake in the program, which allowed Airbus to rebrand it as the “A220.”

Features of the A220

While it looks like an ordinary narrow-body airplane, the A220 has some unique features that distinguish it from the rest. It’s made largely of composite materials, for instance. This is in stark contrast to other narrow-body airplanes that feature an aluminum or steel construction.

Another unique feature of the A220 is its engine. For its A220 family, Airbus went with the new Pratt & Whitney PW1000G. According to Airbus, this new engine is about 12% more fuel efficient than previous engines used in its narrow-body airplanes. When combined with its composite construction, the A220 offers a superior level of fuel efficiency.