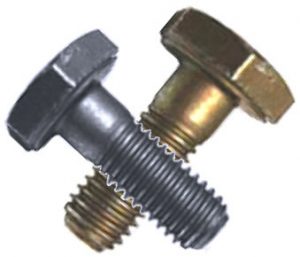 What Are AN Bolts?

An acronym for “Army-Navy,” AN bolts are characterized by their specification. They adhere to the Army-Navy specification of their namesake.

To the untrained eye, AN bolts look like ordinary bolts. They feature a partially threaded shank with a head. Like with most other bolts, they are designed to secure multiple parts together. AN bolts can be inserted through the threaded holes of two or more parts, after which they’ll hold the parts together.

Why AN Bolts Are Used in Airplanes

The Army-Navy specification requires threading to be pressed. AN bolts have external threading, which extends partially up the shank. This threading isn’t cut, however. Instead, it’s pressed into the shank itself. The end result is stronger threading that’s less likely to break when exposed to a load or vibrations.

How to Choose AN Bolts

Whether you’re planning to use them in an airplane or any other application, you’ll need to choose the right type of AN bolts. AN bolts adhere to the Army-Navy specification. With that said, they are available in different types.

You can find AN bolts in different lengths. The length of an AN bolt is reflected in the number of its AN specification. An AN10 bolt, for instance, is longer than an AN8 bolt. AN bolts are also available in different materials. You should consider the material from AN bolt are made.

Looking for AN Bolts?