Airbus to Develop New A350 Variant 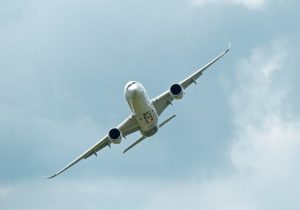 Airbus has announced plans to develop a new variant of its A350 family. As you may know, the A350 is a wide-body commercial jet. It was introduced in 2015 with Qatar Airways. Since then, it’s been used by some of the world’s biggest commercial airlines, including Singapore Airlines, Cathay Pacific and Lufthansa. While Airbus isn’t retiring the A350 anytime soon, the aerospace manufacturing company said it’s developing a freighter variant that will launch in the coming years.

The A350 has been a popular choice among commercial airlines — and for good reasons. According to Airbus, it features a construction consisting of over 70% “advanced materials.” The A350 is still constructed of some traditional materials, but it features next-generation materials as well. Over half of the A350’s body, for instance, is constructed of carbon composites. The A350 also features titanium and aluminum alloys in its construction. When combined with the Rolls-Royce Trent engines, these advanced materials make it a highly efficient jet.

According to Airbus, the A350 has 25% lower operating costs than previous-generation jets. It’s able to fly a longer distance while consuming less fuel. With these benefits, the A350 has become a popular choice among commercial airlines. Many commercial airlines have become conscious about fuel efficiency. Fuel-efficient jets like the A350 cost less to operate and are better for the environment than their counterparts.

Airbus, however, is planning to develop a new variant of the A350. Unlike the existing A350, the new variant won’t be a commercial passenger jet. Rather, Airbus is planning to make it a freighter jet. When speaking about the new A350 variant, Airbus CEO Guillaume Faury said, “We are enhancing our product line with an A350 freighter derivative, responding to customer feedback for increased competition and efficiency in this market segment.”

Boeing currently holds a tight grip on the freighter jet market. The Boeing 777x is a freighter jet that’s used extensively to transport cargo across the world. That may soon change, however, with the introduction of Airbus’s new A350 variant.