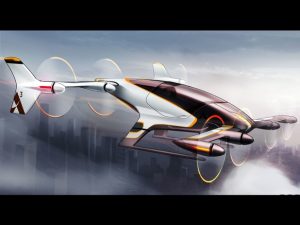 Ever since they were depicted in Back to the Future II, flying cars have been a thought-provoking concept. Instead of driving on congested highways, they would allow us to travel in the skies; thus, shortening travel times while reducing the risk of collision. Up until now, however, flying cars have been just that: a concept. But that may soon change, as Airbus is looking to develop them.

Of course, the problem with flying cars isn’t the flight mechanics; that’s something we’ve already perfected. The real reason flying cars aren’t currently in the skies is because of the licensing requirements for pilots. If you want to fly an aircraft, whether it’s a flying car, helicopter or jet, you need training and a license. That’s something Airbus is trying to bypass by developing an autonomous, self-flying car.

Dubbed the “Vahana,” Airbus’ self-flying car will eliminate the need for official training and a pilot license. With its self-flying autonomous technology, it performs all of the necessary functions, including take off, landing and maintaining heading. The Vahana will reportedly boast eight propellers that are mounted to its wings. It’s said to take off and land vertically like a helicopter, but in the air it flies horizontally like an airplane. This is known as VTOL, an acronym for vertical take-off and landing.

Airbus recently announced that it’s working with Near Earth Autonomy to develop a new form of self-flying technology for its use in its flying car. While Airbus is familiar with flight mechanics and aerospace manufacturing, it doesn’t have the tools needed to produce a safe and effective autonomous system — and that’s why it’s seeking the help of Pittsburgh-based Near Earth Autonomy. Reports indicate that the two companies will refine a technology known as “Peregrine,” which is an autonomous system found under the fuselage. It features the lidar, GPS sensors and computer processors. As the Vahana drops altitude, it scans the surrounding environment while subsequently looking for a clear and safe spot to land.

“Today you have several sensor systems which are available to provide information on the surroundings to detect moving objects or human forms,” says company CEO Robert Vergnes. “But the software which is going to make decisions does not yet exist.” He doesn’t see that changing for a decade or two.”

Airbus says it plans to test a Vahana prototype later this year, though a specific date has yet to be announced.