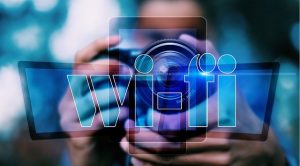 There are wireless networks just about everywhere. When flying aboard a commercial jet, you may even have the option of connecting your smartphone or other devices to Wi-Fi. Countless commercial airlines now offer Wi-Fi. But the problem with in-flight Wi-Fi is that it’s not particularly fast, nor is it reliable. Airbus, however, is looking to improve the experience for passengers by developing a new laser system.

According to a recent press release, Airbus is developing a laser system that will essentially beam internet service to its commercial jets, thus offering passengers fast and reliable in-flight Wi-Fi. Known as project UltraAir, it will leverage a constellation of satellites orbiting Earth. As these satellites fly around Earth, they’ll beam internet service to Airbus’s jets using lasers. Passengers will be able to connect their smartphones and devices to the plane’s in-flight Wi-Fi, which will exchange data between the satellites via lasers.

The Current State of In-Flight Wi-Fi

If you’ve ever used in-flight Wi-Fi before, you may recall its poor performance. When compared to ground-based Wi-Fi — and even mobile broadband internet — it’s slower and more susceptible to disruptions. This is due to the fact that most commercial airlines currently use radio frequency (RF) waves for their in-flight Wi-Fi. They still rely on a constellation of internet-beaming satellites. These satellites, though, beam internet service to commercial jets using RF waves.

RF bands have become more congested over the years. As more airplanes and other vehicles begin to use them, the performance of RF-based in-flight Wi-Fi decreases. Airbus hopes to solve this problem with its project UltraAir. UltraAir uses satellites just like the current RF-based in-flight. The difference is that it uses lasers rather than RF waves. With lasers, there’s no risk for congestion, meaning internet service can travel faster and more fluidly from the satellites to the commercial jets. Airbus even explains that lasers can relay data in real time.

“From their position in geostationary orbit, the SpaceDataHighway (EDRS) satellites relay data collected by observation satellites to Earth in near-real-time, a process that would normally take several hours,” wrote Airbus when announcing project UltraAir.

Airbus is hoping to improve the current state of in-flight Wi-Fi using lasers. With its project UltraAir, Airbus will beam internet service to its commercial jets using satellites. If all goes as planned, it could lead to a faster and more reliable in-flight Wi-Fi service for passengers.