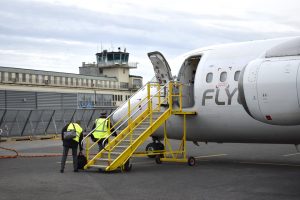 One of the predictive maintenance approaches currently being used by Airbus is aircraft-centric. This is essentially a digital program known as Prognostics and Risk Management (PRM). Delta Airlines was the first customer of PRM, which it began using 2016 after working closely with Airbus. PRM uses a web-based application that’s able to perform calculations using a condition monitoring system that comes preloaded in aircraft. The system collects inflight data, which it sends to controllers on the ground through  ACARS. It also features various computer algorithms to detect system flaws and degradations.

According to Airbus, PRM has saved operators over $550,000 in just one year by monitoring only a few select parts on some 40 Airbus A330s. “This savings is just the tip of the iceberg” said Vincent Swiderski of Airbus Services.

In addition to PRM, the other predictive maintenance approach used by Airbus is data-centric. Airbus has partnered with easyJet to optimize this approach. Data-centric collects data from numerous sources and stores this data in the Airbus cloud, where it can then be applied to other algorithms to improve safety and experience. Airbus says its data-centric approach is a powerful way to contextualize information. However, it also says that user feedback is critical to validating the right alerts, as there’s a possibility of false flags.

So, what’s next for Airbus and its predictive maintenance systems? The company will continue developing and enhancing these two approaches. In 2018, however, Airbus says it will converge its data-centric and aircraft-centric approaches into a single predictive maintenance system. While there’s no specific time table set for this convergence, the company says it will likely happen some time in the first quarter of 2018.