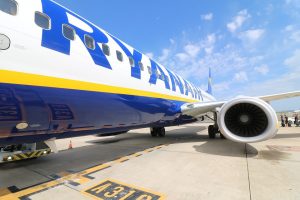 Airbus is on track to launch its Racer rotorcraft in 2020. Last week, the aerospace manufacturing giant unveiled  a scaled-down model of the rotary-wing aircraft while presenting at the Heleitch International show. A spokesperson for Airbus described how the company is planning to meet its target objective of performing a live test flight of the Racer within the next two to three years.

What is Airbus’ Racer rotorcraft exactly? The Racer is part of Airbus’ Clean Sky European research program — a joint initiative involving public as well as private organizations to minimize the environmental impact of the aviation industry. Racer is actually an acronym for “Rapid And Cost-Effective Rotorcraft.” That term sums up Airbus’ new rotarcraft nicely.

Once complete, Racer will feature a cruise speed of about 220 knots (400 km/h). While the cruise speed of Airbus’ upcoming Racer is impressive, the real beauty of this rotorcraft is its operational cost. Like a helicopter, the Racer is a rotary-wing aircraft that creates lift generated by its wings (propeller blades). The wings essentially push air below to the Racer, thereby creating lift that keeps it in the air. However, Airbus says that its Racer rotorcraft will cost about one-quarter less to operate than a traditional helicopter. Consider the high cost of helicopter flights — primarily from fuel consumption, of course — that’s a substantial savings that could save airlines millions of dollars per year.

The Racer will weigh about 7 to 8 tons. Each propeller blade of Airbus’ new craft will spin at about 3,000 rpm. The Racer’s lateral gear boxes are also expected to feature a heater exchanger to transfer heat outside the craft.

Airbus passed the preliminary design stage for its Racer rotorcraft in July. When speaking about this milestone, Tomasz Krysinski, head of research Airbus Helicopters, said that that this allows Airbus to save interfaces and definitions of the main systems. Krysinski added that assuming all goes as planned, Airbus will begin the final assembly stage of the Racer in the fourth quarter of next year.

“Today we unveil our bold vision for the future of high-speed rotorcraft,” said Guillaume Faury, Airbus Helicopters CEO. “This new project, pulling together the skills and know-how of dozens of European partners through the Clean Sky 2 initiative, aims to bring increased speed and range at the right cost, thanks to a simple, safe and proven aerodynamic formula. It will pave the way for new time-sensitive services for 2030 and beyond, setting new benchmarks for high-speed helicopter transportation.”