5 Facts About the Boeing Atlas V 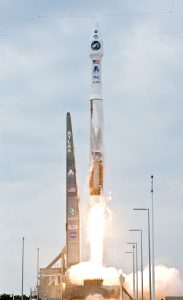 Have you heard of the Atlas V? It’s the fifth version of Boeing’s expendable rocket-based launch system. The first Atlas V flight was conducted in 2002, with the most recent flight occurring in 2021. Even if you’re familiar with the name, though, there are probably some things about the Atlas V that you don’t know. This post reveals five surprising facts about the Atlas V.

The National Aeronautics and Space Administration (NASA) has already agreed to use the Atlas V to send astronauts to the International Space Station (ISS). In 2011, Boeing revealed that it had secured a contract with NASA to send astronauts to the ISS. For the mission, the Atlas V will be used as the launch system for Boeing’s crew capsule, the CST-100.

NASA isn’t the only customer of Boeing’s Atlas V. Amazon has agreed to use Boeing’s dual-stage launch system as well. Unbeknownst to many of its customers, Amazon is developing a high-speed internet service. Known as Project Kuiper, it consists of a network of small, low-orbiting satellites that beam an internet connection down to Earth. For its Project Kuiper, Amazon signed a contract with Boeing for nine Atlas V launches.